I write poems, sporadically. I average about 6 poems per year. Growing up in Tamil Nadu; I never imagined, one day I would enjoy crafting poems. Poems were boring, not worth my time.

Perhaps, you might think the same?
Poems help you to reflect and capture meaningful experiences of your life.

How I started writing Poems?
My Journey in writing poetry started in 2014.
One Evening; I was walking to campus to meet a friend. We planned to have dinner at the dining hall.
My experience walking to campus was rich, stirring, vivid and memorable. I decided to capture the memory through poetry. Thus, I started my journey to write poetry. I write about places, people, philosophy. I try to keep them simple.

I keep updating them
Read them and Enjoy! 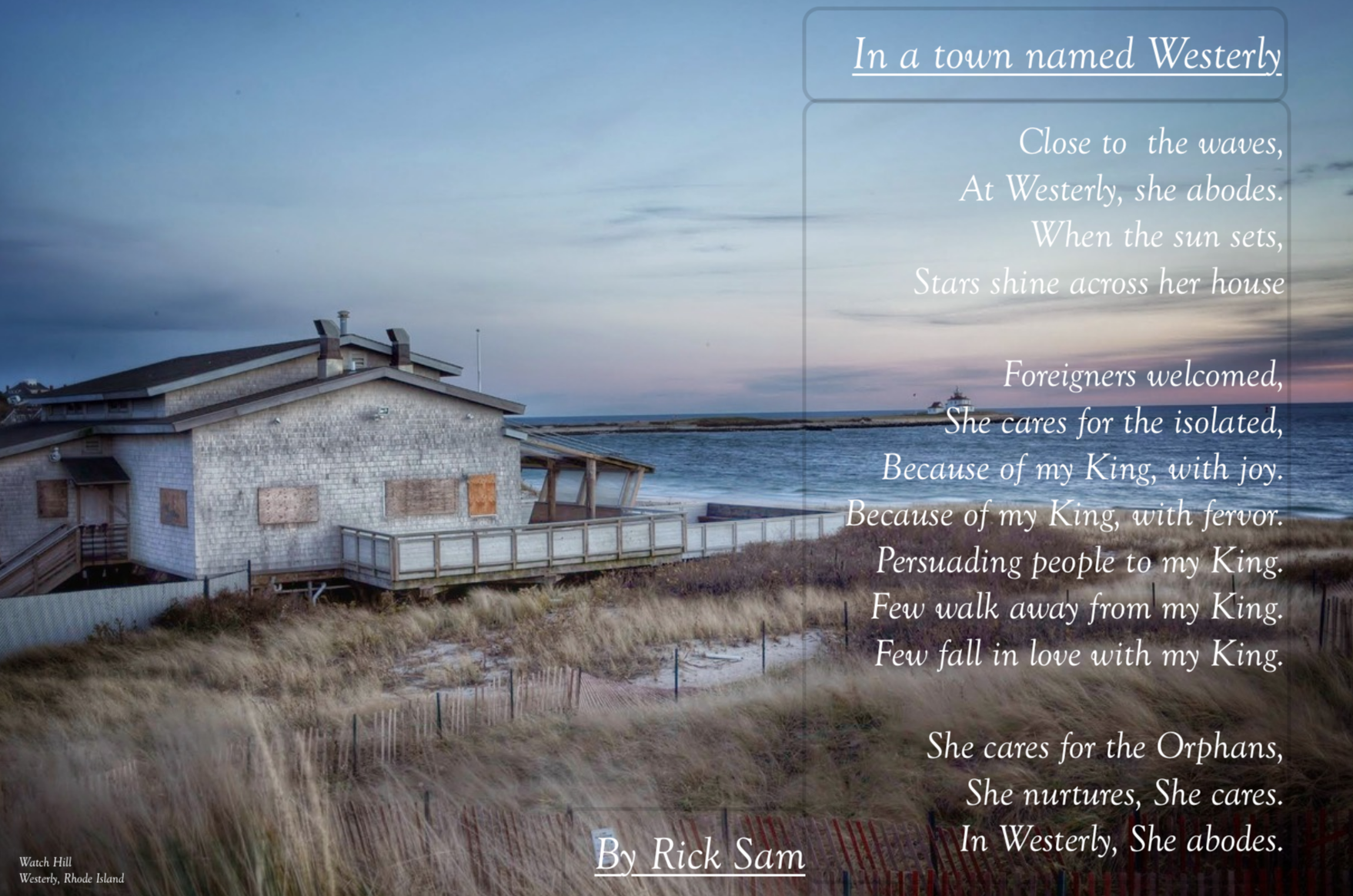 Close to the waves,
At Westerly, she abodes.
When the sun sets,
Stars shine across her house

She cares for the Orphans,
She nurtures, She cares.
In Westerly, She abodes.

Comments: Crafted to recover my creativity in this season.

A Journey of Her

A warm day…..
She bore him,
With felicity, delight, joy.
She hoped in my King for him
Faithful to my King for him.
Faithful to my King until the end.
She grew lassitude, afflicted,
Powerless to hold him in her tenderness.
Off— he leaves, distant.
Missing her, Missing her tenderness.
A loyal friend, embraces him, adopts him.
Her prayers, Her prayers…
Alleviate afflictions,
Her prayers, Her prayers…
Her heart pure, Her heart anchored for my King.
He delights …. from her prayers.
Awaits for his future..
Awaits for her…..

Comments: I crafted this appreciating friendship of Mrs. White.

The Ignatian from Loyola: 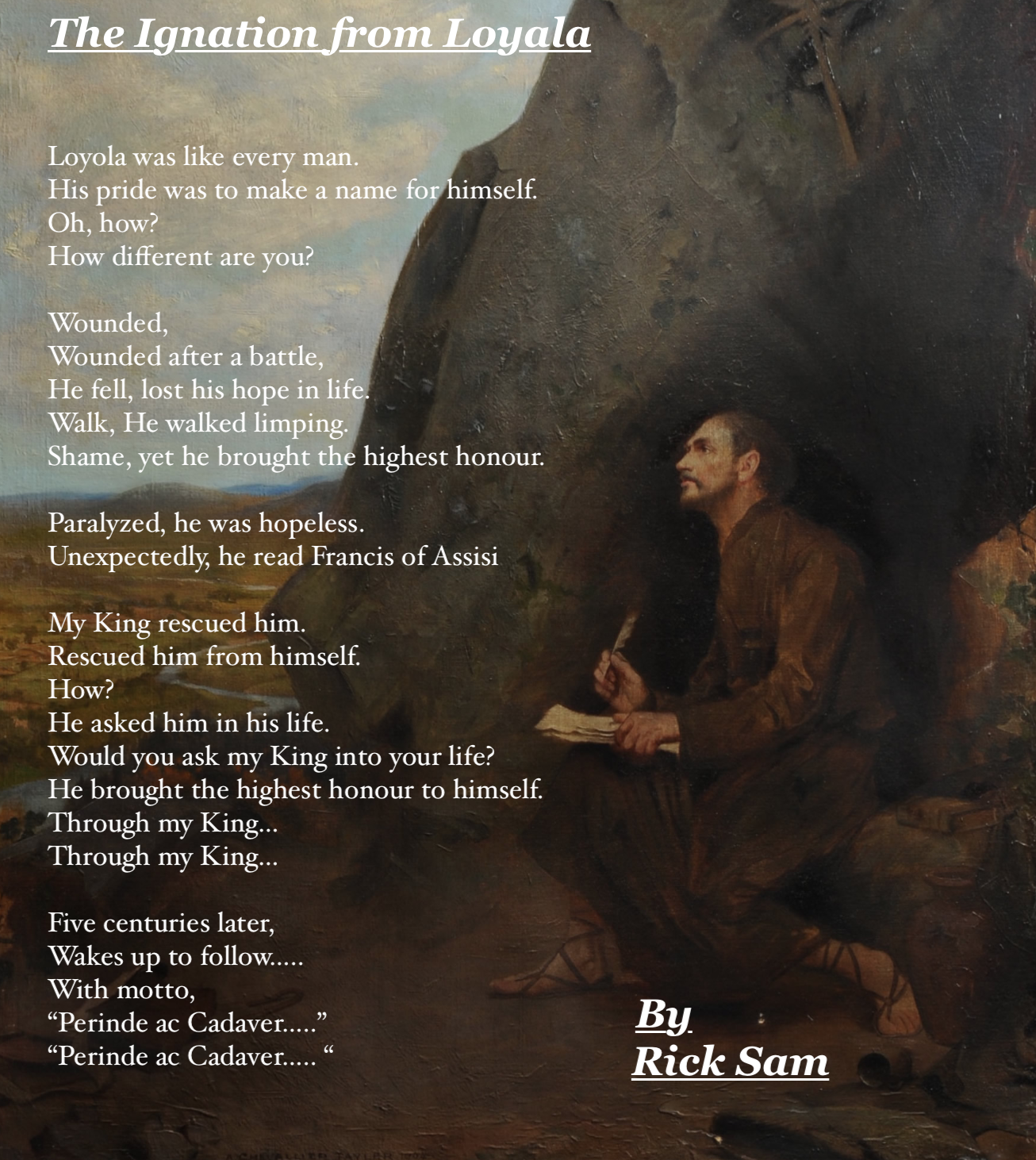 Loyola was like every man.
His pride was to make a name for himself.
Oh, how?
How different are you?

Wounded,
Wounded after a battle,
He fell, lost his hope in life.
Walk, He walked limping.
Shame, yet he brought the highest honour.

Paralyzed, he was hopeless.
Unexpectedly, he read Francis of Assisi

Comments: I wrote this after understanding the impact of Ignatius of Loyola

Author: Rick Sam
Date: Oct 27, 2018
© You may not use it without the author's permission.
Descartes: On and On He Flew 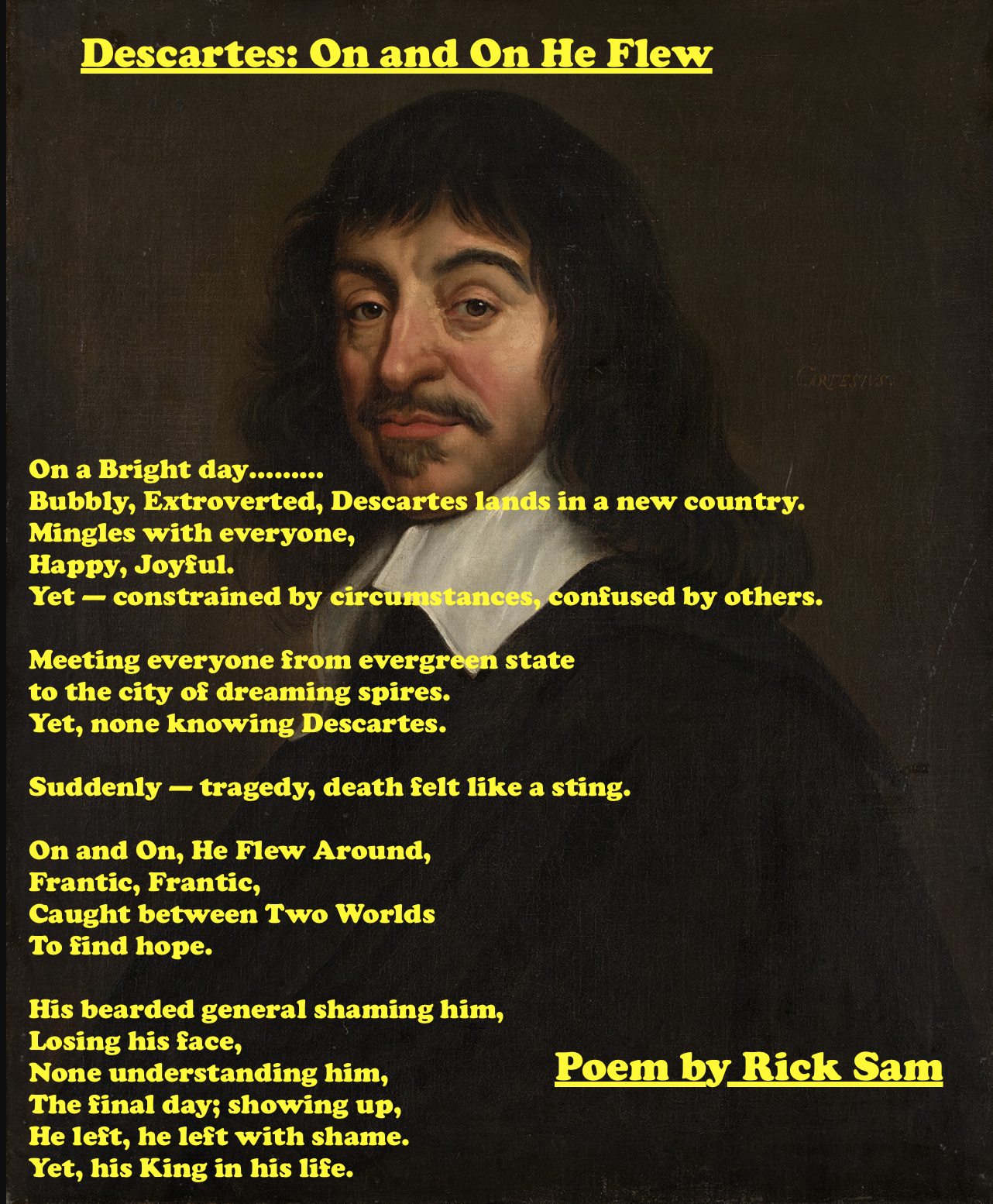 On a Bright day………
Bubbly, Extroverted, Descartes lands in a new country.
Mingles with everyone,
Happy, Joyful.
Yet — constrained by circumstances, confused by others.

Meeting everyone from evergreen state
to the city of dreaming spires.
Yet, none knowing Descartes.

On and On, He Flew Around,
Frantic, Frantic,
Caught between Two Worlds
To find hope.

His bearded general shaming him,
Losing his face,
None understanding him,
The final day; showing up,
He left, he left with shame.
Yet, his King in his life.

My first poem this year. I came across how Descartes bled to death in Descartes's Secret Notebook by Amir D. Aczel. Descartes was in Swedish court and influenced the young Princess . She left Sweden to Rome. However, these are my own reflections on life. Poetry is taken as metaphor and to be imagined. 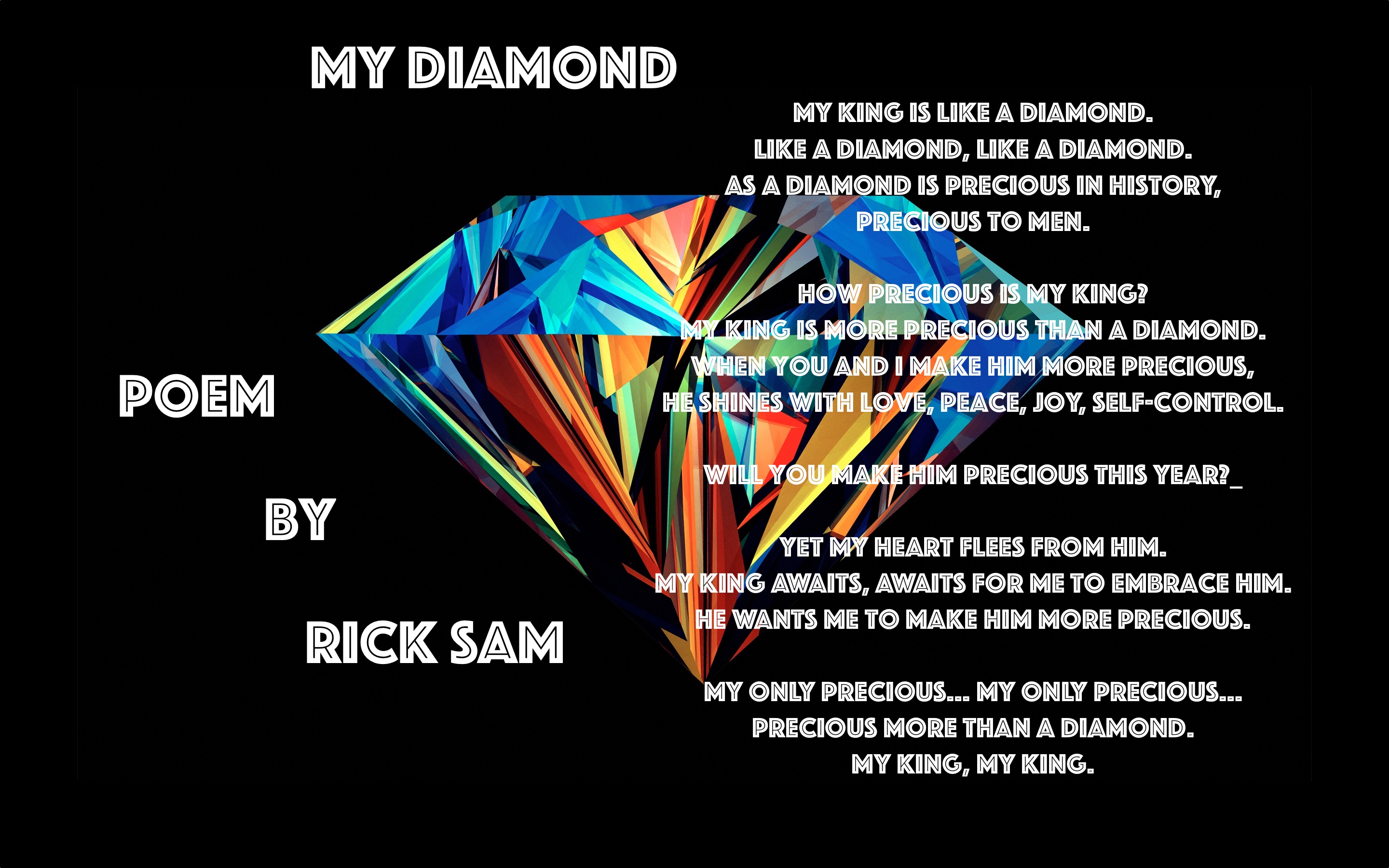 How Precious is my King?
My King is more precious than a Diamond.
When you and I make him more precious,
He shines with Love, Peace, Joy, Self-Control.

Will you make him Precious this year?_

Yet my heart flees from him.
My King awaits, awaits for me to embrace him.
He wants me to make him more precious.

My only Precious… My only Precious…
Precious more than a Diamond.
My King, My King.
—
Author: Rick Sam
Wrote: Dec 31, 2017, Ambassador Track, Baltimore.
Wrote this as a challenge from Jairam for 2018 to keep my King
as my Diamond in my life.
Thank you — Zeke, Mohan, Kevin Niemen, Rachel Dass,
Emily, Lauren Davy, Erica, Ricky Stevens, Chandler, Alex,
Daisy, Harts, Dean

I decided to write this to make a poem funny. 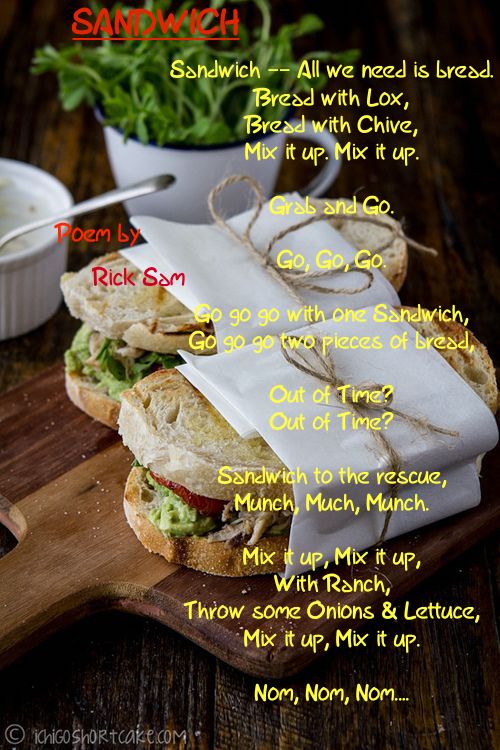 Sandwich –– All we need is bread.
Bread with Lox
Bread with Chive
Mix it up. Mix it up.
Grab and Go


Author: Rick Sam
Date: April 21, 2017
© You may not use it without the author's permission.
Comments: Written after having a fun conversation with Allie Schrader
and Joe Schrader, Sue Diaz Hart, Britta Hart, Christopher Hart, Annie Cecil 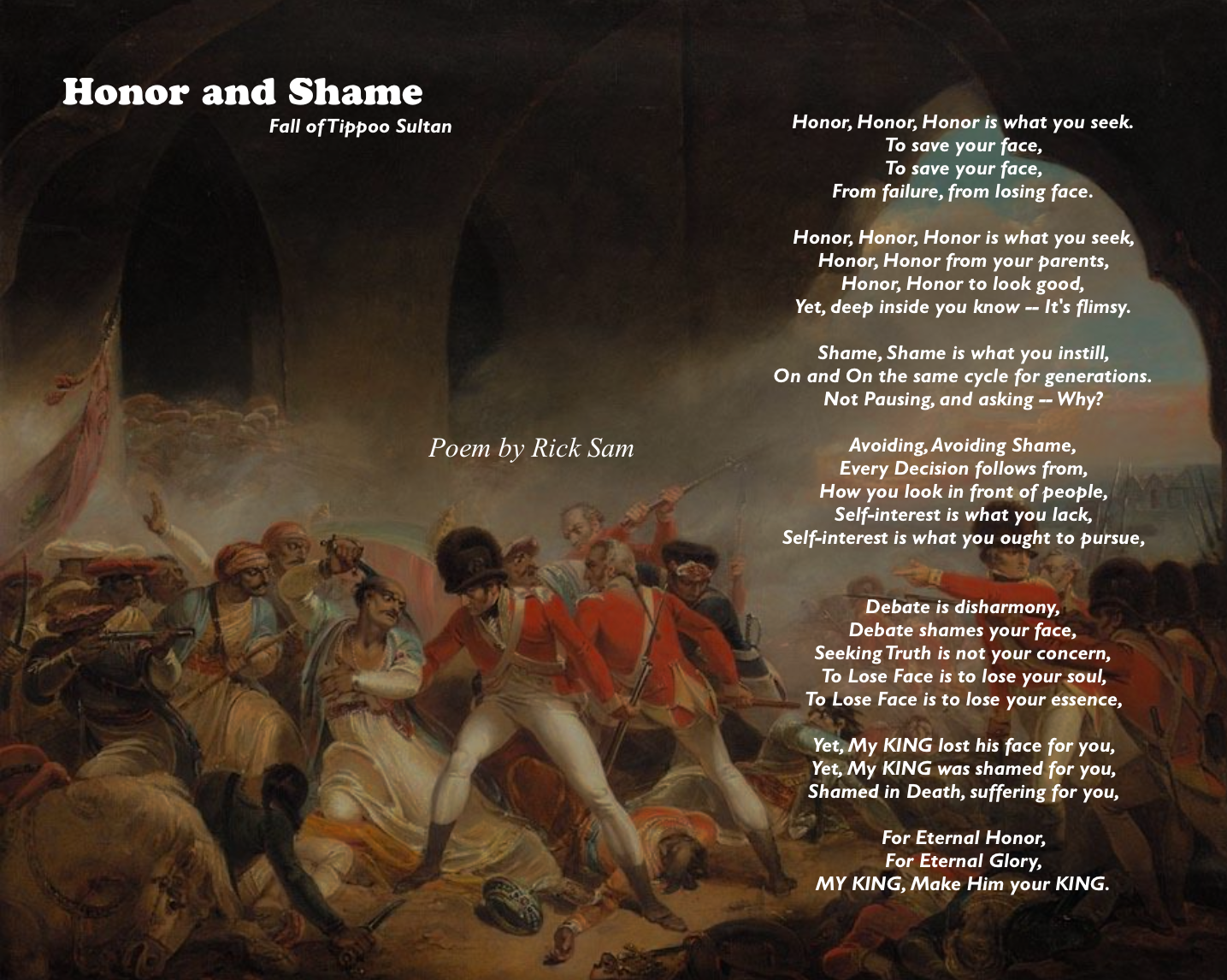 Shame, Shame is what you instill,
On and On the same cycle for generations.
Not Pausing, and asking -- Why?